LCHF stands for Low-Carb/High Fat. It’s the way we have been eating for nearly 10 years. It is, of course, the way we provision our boat, Rikki-tikki-tavi, for six-plus months of cruising. This season, we are exploring Southeast Alaska for the second time. We will supplement our food supply along the way with freshly caught fish and shellfish.

Our diet is primarily focused on the inclusion of natural fats at every meal. We try to make sure they are of the highest possible quality. Of no less importance is eating an adequate amount of protein, which we get mainly from naturally raised animals and eggs. Of least emphasis is carbohydrates from non-starchy vegetables. Finally, we throw in things like nuts, coffee and teas, 90% cocoa dark chocolate, herbs & spices.

This is an approximate list of what we brought with us into British Columbia. We bought a few more vegetables at Ganges on Saltspring Island. Clark caught a nice lingcod, a very large yellow-eye rockfish (we were hoping for another lingcod), and a few prawns in Jervis Inlet. We ate oysters, clams and mussels during our five days in Princess Louisa. Another very large lingcod took Clark’s hook in Fitz Hugh Sound. After this stop, we were moving quickly and did not stop to fish.

Upon reaching Ketchikan, Alaska, we bought red cabbage, Daisy sour cream, and a bottle of gin. Clark caught a kelp greenling in Cholmondeley Sound and a big China rockfish at Kasaan. Our new friend Jene bought a 14-pound King salmon from a fisherman in Meyers Chuck. We split it between us.

In Wrangell, we bought five pounds of ground elk meat (from Alberta), some chicken thighs, four dozen eggs, a block of pepper jack cheese, and a cauliflower. When we arrived in Petersburg, we were fortunate to snag three dozen fresh eggs from pastured hens at their new, local Saturday Market. The large grocery at the top of the hill, Hammer & Wikan, was having a “tent sale”. We bought three large Haas avocados, a pint of organic heavy cream and California strawberries (friends coming for dinner!), green onions, eight red bell peppers (59¢ each!), and four more dozen eggs.

Petersburg is the place to catch herring. Clark picked up a few in very short order. We fried them up for lunch and found they tasted very much like brook trout.

While in Petersburg, we were invited to go out on a fishboat, the Hoyden, to watch the pulling of prawn traps. Our friends Mary and Wayne fish salmon and halibut commercially, so the “shrimp” (as Alaskans call spot prawns) are for their personal use. It was a great experience! Clark helped de-head the shrimp in the pouring rain on the way back to the harbor. They gave us two large bags full of prawns and a good-size King salmon for our tiny freezer. Since they eat fish all the time, we invited them over for a dinner of grassfed beef patties topped with shitake mushrooms, sautéed cauliflower, red wine, with berries and cream for dessert.

After we left Petersburg, Clark added a small halibut to the larder in Sandborn Canal. Yesterday, he caught a large Kelp Greenling and two big Dusky Rockfish.

We drink coffee first thing upon getting up and around. A good portion of coconut oil is melted into our steaming brew. Sometimes we will also add some coconut milk.

A typical day’s eating begins with at least three eggs each. They are cooked with unbroken yolks over some sautéed onions with a bit of diced red bell pepper. Butter and/or coconut oil is the cooking fat. I like butter best. Clark will add some cheese cubes and perhaps some ground meat to boost the protein.

Our late-morning snack may be a 1/8-cup of a variety of raw nuts or a few chunks of pemmican. Lunch is usually canned sardines or herring, tuna or salmon salad, made up with olive oil, capers, mustard and sundried tomatoes. We serve it out of the cans it came in. We have coffee with coconut oil nearly every afternoon, usually accompanied by some nuts.

Dinner is the only meal where we eat a side of vegetables, which is generally cauliflower or cabbage (these store best on board). Sometimes we skip the veggies and just eat the fish, liver, or beef. These are usually cooked in lard, suet or a combination of butter and coconut oil. It depends upon the seasoning. We may drink hot herb tea sometime during the evening. Clark eats a small portion of very dark chocolate every evening. I eat a smaller serving every couple of days.

When we go away from the boat for an excursion in the dinghy, we take our homemade pemmican. Clark made this during the winter with grassfed beef and suet from Slanker’s in Texas. He sliced the meat thinly and dried it at 110˚- 115˚ in our dehydrator. He rendered the suet, strained it, and poured it into mini loaf pans. The dried meat was pulverized in our “new” 1947 commercial Hobart meat grinder. Clark mixed the prepared beef with melted suet in about a 50/50 ratio, and formed it into patties inside plastic snack baggies. The only addition was a little salt. A small amount of this concentrated “paleo power bar” will keep a person fueled for a very, very long time! You can’t eat very much before your body tells you it doesn’t need any more.

This evolutionarily and metabolically appropriate way of eating has improved and subsequently sustained our health for a nearly a decade. Our selection of foods, minus the freshly caught fish, is what we eat all year. We eat the same foods whether we are camping in the desert or staying at our land home in Sacramento. We eat the same LCHF way when we go out or visit friends. If we anticipate that no suitable food will be available at a social gathering, we eat before we go. Missing a meal is of no concern. Intermittent fasting is actually very beneficial and we don’t ever feel hungry anyway.

We try to avoid commercial and processed foods most of the time, but while driving long distances, we have compromised this somewhat. When stopping for gasoline at the Costco stores along I-5 between Anacortes and Sacramento, we usually buy a whole roasted chicken. We will eat part of it at the food court, where we can get plates and utensils. Then, we cut the chicken apart and take the rest with us to eat later. This practice saves time, money, and circumvents the uncertainty of finding something reasonable at a restaurant.

If you have any questions about what we eat (or why), please don’t hesitate to ask. We are very passionate about LCHF!

To your health,
Nina & Clark

3 thoughts on “The LCHF Boat” 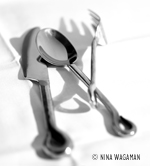